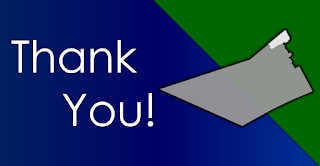 I want to thank everyone who came out and voted in yesterday's election. We have reached the end of a long journey in one of the most competitive races many people have ever seen in Ferguson Township. Earlier today I called Patty Stephens to congratulate her on running a successful campaign. She thanked me for being nice and making her experience of running for office positive. Today it's rather common for political campaigns to turn negative and for political opponents to engage in back and forth swipes that can leave many disgusted with one person, the other, or both. In my campaign, I didn't want to have any negative exchanges because I wanted to maintain a positive atmosphere within my neighborhood. No matter our differences, I strongly believe that together we are one community. Therefore, I thank Patty for making my campaign a positive experience as well.

I'd like to thank the 276 voters who came out to the polls yesterday for me, your support was greatly appreciated. While the results weren't what we were hoping for, there is still a pathway for all of us collectively to become involved in Ferguson Township. Many people have came forward encouraging me to continue in my role on the Planning Commission which helps advise the Board of Supervisors. The Township offers many ways for residents to volunteer in a variety of Township matters.

In addition, I would like to thank everyone who supported the campaign, including my family and my girlfriend Kara. I wouldn't have been able to have launched this campaign without the love and support of Kara and for that I can never thank her enough. It was wonderful to have meet hundreds of residents along the way. Everyone I meet was very open and welcoming, it's great to have all of you as neighbors.

Again thank you to everyone who supported me along the campaign trail.